Consistent Quality & Ease of Use

Wood is a natural material and each piece is unique. This is partly what makes it so aesthetically pleasing and yet it can be a source of frustration and uncertainty when looking for guaranteed performance quality. However, with Accoya wood you can be sure of its consistent quality, durability and dimensional stability.

Wood acetylation is a process that has been studied by scientists around the world for more than eighty years. The Accoya wood production process combines this work with years of proprietary research and investment to deliver consistent results on a commercial scale. Unusually, the effectiveness of the process used to manufacture Accoya wood is measured after the wood has been produced, using an array of sophisticated and proven analytical techniques.

Each batch is analysed and Accoya wood always meets the requirements of Durability Class 1 for Use Classes 1-4 in accordance with EN 350-1 & EN 335-1.

Because Accoya wood is modified all the way through, rather than just at the surface, when it is cut, planed or jointed there are no exposed unprotected surfaces in any dimension. This completely removes the need to apply additional chemical preservatives as is necessary with unmodified or envelope treated woods.

Accoya is based upon acetylated wood technology, a process that has been studied by scientists around the world for more than 80 years.

This method of improving wood has been proven to deliver such superior performance that it has long been used as the "gold standard" against which other methods are measured.

The physical properties of any material are determined by its chemical structure. Wood contains an abundance of chemical groups called "free hydroxyls". Free hydroxyl groups absorb and release water according to changes in the climatic conditions to which the wood is exposed.

This is the main reason why wood swells and shrinks. It is also believed that the digestion of wood by enzymes initiates at the free hydroxyl sites - which is one of the principal reasons why wood is prone to decay.

Acetylation effectively changes the free hydroxyls within the wood into acetyl groups. This is done by reacting the wood with acetic anhydride, which comes from acetic acid (vinegar when in dilute form).

When the free hydroxyl group is transformed to an acetyl group, the ability of the wood to absorb water is greatly reduced, rendering the wood more dimensionally stable and extremely durable.

Acetyl groups are already naturally present in all wood species. This means that the manufacturing process adds nothing into the wood that does not already occur within it.

The end product, Accoya® wood, does not add toxins to the environment. The effect of altering the wood's chemical structure, as opposed to merely altering its chemical content, is to create an end product that is dramatically superior to its source species.

Accoya wood is modified right through the cross section whereas, by contrast, virtually all other treatments merely insert chemicals (such as oils, ammonia or metal compounds) into the wood, improving durability, to a degree, but not dimensional stability. 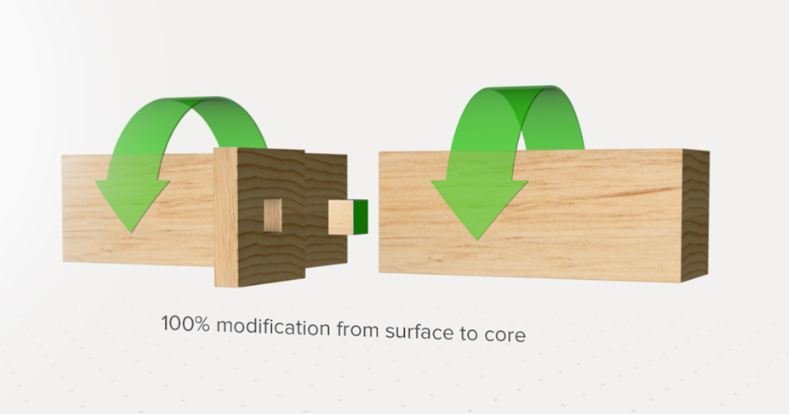 Timber to metal or aluminium please visit our Anchormark page.